Sometimes I feel as though the bacteria chose me, and not the other way around.

People often ask me, “why fermentation?”

Of all the many hobbies and passions I have, why has this strange phenomena captured my attention…and my heart!?! The answer is, I don’t exactly know; sometimes I feel as though the bacteria chose me, and not the other way around. I was going about my business, homesteading, re-wilding, raising children and goats alike and fleeing the insanities of modernity when one day I found myself holding a copy of “Wild Fermentation” by Sandor Elix Katz in my hands, while one of my best friends was experimenting with letting his food sit out on the counter to “culture.”

I was skeptical, to say the least. So I picked up the book and started thumbing through it, ready to shoot holes in the ideas of whatever knuckle-head had convinced my homie to rot his food a bit before eating it. I teased Raymond that he was making high grade compost for himself; but as I looked further and further into the book, I became more and more intrigued.

Meanwhile, Susan Weed’s recipe for Dandelion Wine caught my eye, and so in the spring of 2007, I crafted my first batch of homemade hooch, picking thousands of little dandy petals and mixing them with sugar, water and ginger, unknowingly opening a can of worms from which I now can never escape…nor do I want to!

Many moons later, I find myself more deeply immersed in the forest, more satisfied with my off-grid lifestyle, and more humbly grateful than ever before to the many cultures and the amazing plethora of fermented beings with whom I share my home and life.

Fermentation is older than written history, older than written language, & some say older even than spoken thought itself. Our ancient ancestors knew (as do chimps and elephants) that when a fruit fell to the forest floor and spent a little time there, its effects were delightful! Some speculate that even before people knew how to keep fire, they knew the magic of fermented honey water, discovered in wild hives where rain water had found its way, bringing with it oxygen, and thus awakening the sleeping yeasts.

Humans today rely heavily on chemical preservatives, electrical appliances, and massive and complex storage and distribution systems to get their food. These systems are taking an unfathomable toll on our planet and our souls. We view food as fuel—rather than the nourishing life energy that it is—and fill our bellies with dead, disembodied food. The effects of this insanity are readily apparent all around us in the quality of our air and drinking water, the treatment of the plants and animals which we feed upon, the degradation of our soils and ecosystems, and the deep unhappiness in our hearts and vast emptiness in our eyes.

At my project Wilderlandia and at the Firefly Gathering, we are co-creating an alternative reality to the current paradigm. Viewing ourselves not separate from, but inextricably woven into the very fabric of life, we seek to harmonize with our local ecosystems and the larger biosphere of which we are a part. Food is one of the fundamental ways in which we seek to impart change, reviving the cultural traditions of our ancestors and reclaiming the relationship so imperative to our survival, for we truly are what we eat.

MORE FROM OUR BLOG

Activism is nothing new to The Firefly Gathering, which started because a group of folks realized that the current paradigm was completely unsustainable for our species and planet. However, some folks say Firefly is not the place for activism…here’s our thoughts. 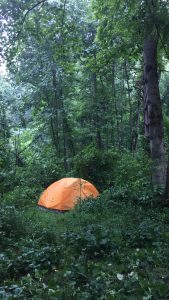 We hope this finds you basking in the ever lengthening rays of spring sunshine, even if that means seeking out a solitary beam of sunlight and letting it fall upon you in your quarantined reality. Whatever this time may look like for you, may the sun shine upon you and fill your soul with joy!

Subscribe to our newsletter for earthskills articles from our community as well as important updates on this year's event.